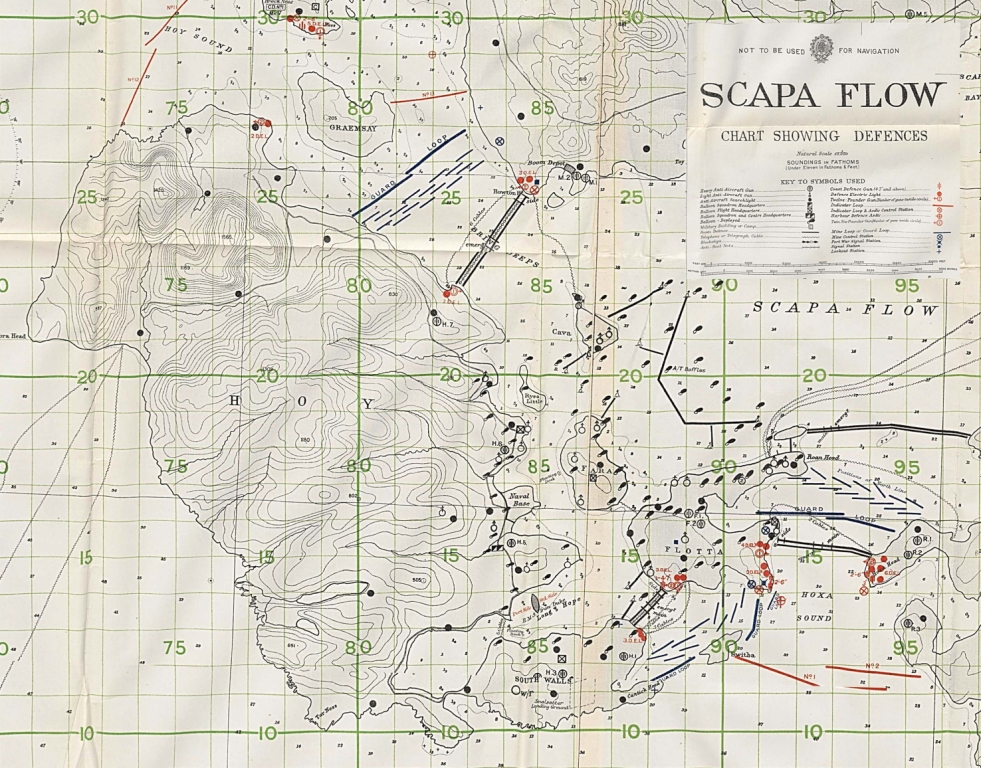 The successful delivery of the Legacies of Conflict Project has relied upon a sound understanding of the wartime historic environment and the contextual narrative in which it is set. To achieve such an understanding, the early months of the project focused on identifying, consulting and copying relevant historical source material held by national and local archives. The information gathered during this phase has directly informed the historical background found in this section of the website. It has also proved instrumental for directing archaeological fieldwork and community engagement activities throughout the project.

As the second largest island in the Orkney archipelago at around 10 miles in length by 5 miles in width, Hoy forms the west and south west sides of the 120-160 square mile natural harbour of Scapa Flow. With substantial upland areas of high ground rising to 479m above sea level in the north, it is not surprising that the inner north eastern shores of the island have served as a welcome shelter to seagoing war vessels from the worst of the prevailing North Atlantic gales for hundreds of years. Hoy has had a long affiliation with global conflict and especially maritime warfare which can be traced from Norse activity in the 1st century AD, through the Napoleonic Wars of the 19th century to the First and Second World Wars of the 20th century.

Hoy’s wartime story is inextricably linked to the broader campaigns and narratives of World War Two (WWII). This historical background endeavours to present a summary of key global war narratives that Hoy and the personnel stationed on Hoy contributed to. It has not been intended as a complete history of Hoy in WWII as this would be a most extensive undertaking and would make for a very large website indeed. A broad chronology has been compiled from National Archives document ADM116/5790 and offers a great summary of the events and activities that took place on Hoy during WWII. William Hewison’s ‘The Great Harbour Scapa Flow’ also offers a very comprehensive history of Orkney during WWII including many detailed references to Hoy and is recommended as a further point of reference. When linking local narratives to global World War events, efforts have been made to include references to the archaeological sites that were involved and which can still be visited today. Check out Site Explorer to see where these sites are. The archaeological legacy that survives on Hoy today represents a powerful and tangible connection to the events that took place and it is hoped that this historical background will serve to demonstrate just how critical Hoy’s role in WWII was.

The principal source of historical documents consulted during the project was the National Archives of the United Kingdom (TNA) at Kew in London. Intelligence summary documents, minutes from war cabinet meetings and defence maps showing site locations as well as detailed unit war diaries documenting the activities and events that took place on Hoy during WWII have been sourced from here.  A highly successful 5 day research visit to TNA was undertaken and over 70 documents, maps, plans and photographs were consulted and digitally copied either in full or in part. A percentage of the records were processed into PDF format so that they could be more easily read and these were uploaded onto a tablet PC which formed one of the many resources for community members and visitors to access at drop-in sessions and other events held during 2014. All of the copied documents have been deposited at the IoHDT Office in Longhope and form a locally accessible archive resource for anyone interested in researching the WWII heritage of Hoy. Please get in touch if you’d like to arrange a time to consult these records.

TNA archive document ADM116/5790 offers an excellent example of how widely beneficial historical documents can be. ADM116/5790 History of the Fleet Base – Scapa Flow 1937-1946 is a vast historical document written shortly after WWII which provides summaries and histories of Royal Naval as well as RAF and Army activity around the Fleet base of Scapa Flow. Examination of this document has provided a great deal of useful information relating to the wartime sites in Orkney, their chronologies, biographies and associated broader contextual narratives as well as some 140 historic photographs of sites and scenes from WWII on Hoy. Information and photographs from this document have been used to form the basis for evening talks, articles in the local island newsletter ‘The Blether’ and the guided walk around the WWII Naval Base at Lyness.

Many of the unit war diaries copied from TNA were found to contain Cassini grid coordinates for military sites on Hoy such as camps, ammunition magazines, stores of equipment & supplies, anti-aircraft searchlight positions and gun batteries providing valuable location and descriptive information. These coordinates were extracted and converted into the National Grid coordinate system before being inputted into a Geographical Information Systems (GIS) database. Here the coordinates were compared against any visible features on modern and historical maps as well as aerial photographs to help identify whether any of the sites may survive as archaeological monuments. The coordinates were also compared against wartime archaeological sites previously recorded in the National Sites and Monuments Record of Scotland (NMRS) held by the Royal Commission on the Ancient and Historical Monuments of Scotland (RCAHMS).

We pick up Hoy’s incredible story of involvement in the global narratives of WWII on 7th March 1936 when Germany, under the leadership of Adolf Hitler and the fascist right wing Nazi Party, contravened the Treaty of Versailles and remilitarised the industrial Rhineland area of Germany. This dramatic action reawakened concerns of renewed hostilities…Read more Preparations for War

Following a conference held by Sir Winston Churchill, recently appointed 1st Lord of the Admiralty, to try and resolve concerns over the lack of air and submarine defences around the Fleet anchorage, the War Office initiated Plan Q, the strategic army defence plan for the protection of the Fleet Base (TNA: ADM116/5790 p.402). This scheme,…Read more Defence Expansion & the War in the North Sea

The threat from air attack became starkly apparent on 17th October when two air raids were carried out on elements of the Fleet in Scapa Flow. These were some of the first bombing raids on the UK during WWII and occurred just one day after Junkers Ju-88 aircraft of Stab 1, Kampfgeschwader 30 (I/KG30)…Read more The Battle for Orkney and the Air Assault on Scapa Flow

Unbeknown to the men working feverishly to bring the defences up to scratch on Hoy, the war in the north was entering a new phase. Although Raeder’s full engagement campaign was exacting a heavy toll on the Royal Navy and the merchant vessels supplying the British North Sea ports, the need to secure the…Read more Operation Weserübung & the Closure of the Battle for Orkney

Although armed reconnaissance flights to monitor the disposition of the Home Fleet continued on into 1940, the campaign to secure Scapa Flow as a strategic Main Base for the British Navy’s operations in northern waters was effectively won. Had this not been the case then the entire course of the war at sea may…Read more The Battle of Britain & Sinking the Bismark

At the height of the invasion scare in the summer of 1940 the army presence also increased on Hoy with the extensive use of parachute troops in the German invasions of Denmark, Norway, Holland and Belgium highlighting a potential threat to vulnerable points such as the Underground Oil Fuel Store (UOFS) at Wee…Read more Invasion Defences & Infantry Training

Entertainment, Supply, Repair & Training As the war wore on into 1941, the naval presence ashore on Hoy continued to increase as more and more of the base facilities were completed. The number of personnel borne on the books of the various base ships at Longhope and Lyness consistently totalled 12,500 from the end of…Read more The Arctic Convoys

1943 marked a major turning point in WWII as the tide began to flow in the allies’ favour. In January Japanese forces conceded the island of Guadalcanal to US Forces and in February German forces were defeated by the Russians at Stalingrad. In March the British continued to push the German Afrika Korps back through…Read more Operation Overlord: RDF/Radar & LCTs

With the allied invasion of occupied Europe underway and German Forces losing ground on several fronts, the danger posed to the Fleet anchorage of Scapa Flow by 1944 was significantly reduced from what it had been several years earlier. The diminished threat and the demand for air defences over the Normandy beachhead led to…Read more Barrage Balloons and the V1 Threat