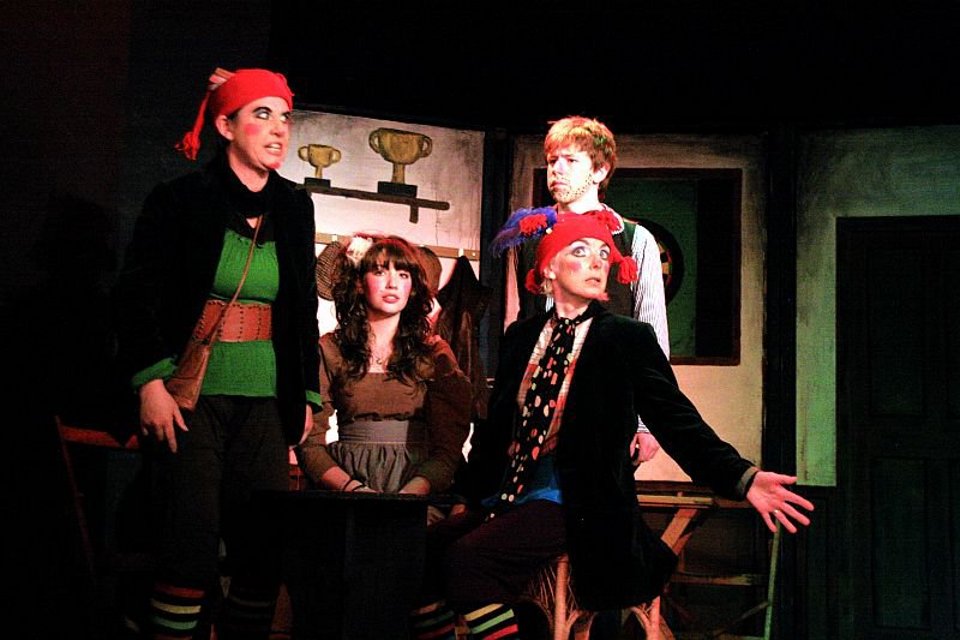 The Gable End Theatre Company Limited was born in 2000 when work started to transform the semi-derelict old school buildings at North Walls into a community theatre.

There was already a thriving amateur dramatic group on the island and it was their desire to have a permanent base from which to work that provided the impetus for the project. They continue to perform an annual pantomime, contribute to the SCDA One-Act Play Festival and facilitate other amateur stage performances.

The stage and auditorium were completed in early 2001, including the rebuilding of the ruined gable from which the theatre takes it name. Many of the fittings were salvaged from the old Phoenix Cinema in Kirkwall, including the comfortable velvet seats.

Phase two included construction of the foyer and the steady upgrading of sound and lighting equipment.

We have recently raised the money to erect a wind turbine that will heat the building and provide some income. We are currently seeking funding for a new kitchen and link between the foyer and the rehearsal/workshop space.

COME AND SEE OUR NEXT SHOW!

The Gable End has an atmosphere all of its own and seeing a show in such an intimate setting is a special event – indeed, many performers cite us as their favourite venue. All our shows are advertised in local shops and post offices as well as in the passenger lounges of the ferry. See our listings and reviews below or visit us on Facebook

Regular previews of what is coming up can be found in the local press, and don’t forget to listen to Radio Orkney’s daily diary where we publicise each event.

Most music and drama events have a licensed bar ~ coffee and ice cream are available in the foyer before films.

The theatre seats seventy-five people, so although it is advisable to book for popular shows there are usually places available on the night. The Gable End Theatre is a company limited by guarantee, with charitable status. As such, we need good audience numbers to cover our costs, so do come and support us and have a great night out!

HIGHLIGHTS FROM OUR PAST PROGRAMME

The theatre continues to attract top level performers from all over the world. It is impossible to itemise all our shows but the following list gives a flavour of the variety on offer.