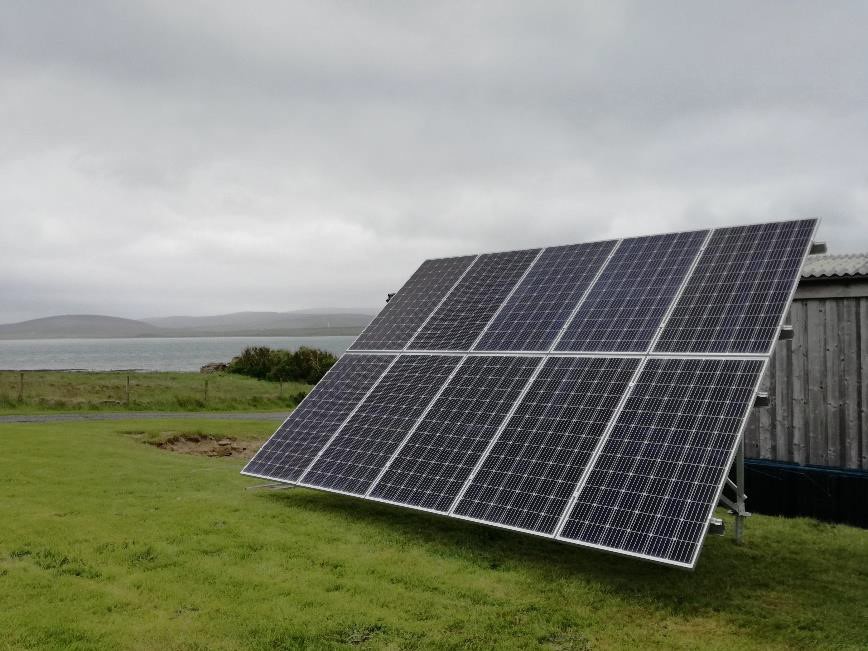 Hoy, the second largest island in Orkney, has a 900 kW wind turbine project that has been busy generating funds for the community since October 2011. This project, owned and operated by the Island of Hoy Development Trust, has provided a wide range of community benefits, ranging from educational and training bursaries through to land purchase, and extension and major refurbishment of one Community Hall with employment and support funding for another. Additionally, the Development Trust operates a daily bus service on the island, which has become hugely valuable, as the island’s only scheduled public transport option, in linking the island’s 360-strong community to the ferry terminals and amenities across the 57 square miles of the island.

In recent years the community of Hoy, along with others across Orkney, has engaged in various renewable energy projects to try and address issues such as grid constraint as well as combat the region’s well-documented levels of fuel poverty, a serious reality for many remote rural Scottish communities that are located off the natural gas grid. These projects range from initiatives to maximise national schemes to improve energy efficiency – such as grants for insulation and LED lighting – to the development of sophisticated equipment for Demand Side Management on a distribution grid that annually exports more electricity to the mainland UK grid than it imports.

A 2018 survey made the Trust aware that the community now wants it to focus on finding ways to utilise renewable energy technology, along with the skills and experience built up over recent years, to create a project to directly benefit the residents of Hoy. Its primary aim is to help offset the premium rates paid for electricity in northern Scotland and help island residents with wider energy costs over an extended period, ideally targeting 25+ years.

The project is now known as the Legacy Project, since it is being funded initially by the existing community-owned wind turbine, which is now in year 10 of an expected maximum 18-year operational life span, and because when this turbine is aged out of service, the new project should still continue and have many years to run.

In January 2019 the Development Trust charged Hoy Energy Ltd (HEL), its own trading subsidiary which operates the 900kW turbine, with the task of developing the Legacy Project.

After assessing the available technologies against the project’s targeted outcomes, it was quickly apparent that PV solar panels and battery storage would be the best choice for core technology, and that if suitable control / domestic interface systems could be developed then the project could well become a reality.

HEL searched the industry for suitable technology suppliers and development partners, of which there were several in each category. However, they found a seemingly unique opportunity in an Edinburgh-based company called StorTera.

It was quickly apparent that StorTera’s wide experience in design, manufacture and supply of renewable energy generation and storage systems, ranging from off-grid supplies in Scotland to telecoms infrastructure support in equatorial Asia, could be utilised to combine the roles of technology supplier and development partner for the Legacy Project.

March 2019 saw the design of an initial test system completed and a manufacturing order placed. The grid connection in the Hoy test-bed facility went live late in April and the StorTera team arrived with the PV array and the rest of the equipment in July.

The initial test system comprised a 3.3 kW solar array along with an energy storage system comprising a 3.68 kW hybrid inverter and 7.5 kWh of lithium ferrous phosphate batteries. The system also includes a custom load controller, which monitors demand and controls supply to specific loads in the home, in order to maximise on-site use of solar and ensure operation is matched to the occupancy profile of any given property.

The system has the ability to eliminate any export of energy to the grid, which in Orkney is particularly useful due to the highly constrained grid capacity on the islands. The regular curtailment of wind turbine exports presents problems enough; adding excess solar generation exported to the local grid would indeed be counterproductive, and so ideally has to be avoided. StorTera has worked with HEL to develop a solution that overcomes these issues and will allow homeowners to reduce electricity costs by powering their homes and heating their water using solar energy and battery storage.

The load controller within the system is designed to maximise use of solar energy: either powering the home directly, or leaving the hybrid inverter charging the battery storage system, or automatically diverting any excess solar generation to a domestic hot water tank or thermal store and/or any other household loads specified by the homeowner at the time of installation.

The flexibility of this innovative system affords efficiency gains that are relevant to the householders’ energy costs rather than any previous industry design focus, which were usually aimed primarily at high generation levels for the purposes of subsidy payments. The ability of this solar PV system to augment an oil fired or solid fuel fired domestic heating system is also seen as a step change in the quest to reduce carbon emissions at the point of use/local level.

Having collated performance data over the winter of 2019/20 and completed the ‘proof of concept’ the test bed system was upgraded with a 5.5kW inverter which also met the new G98 grid connection standard. The winter data also provided vital experience and identified physical limitations in items such as the array support structure used in the test system – a perfectly adequate and suitable design for temperate and equatorial regions, but somewhat over-stressed for the salt-laden high winds of the Orkney winters.

The encouraging results obtained during initial testing period led to the Development Trust allocating additional funding in March 2020 to purchase 5 pilot systems for test installations on Hoy and allow continued development of the load controller.

The Pilot Program will start in 2021, if you are interested in participating click here or contact the IoHDT and let them know before the 18th of January 2021.

The pandemic of 2020 led to long delays in the supply chain, although HEL continued system testing and load controller development through to Nov20 when the equipment for the pilot stage arrived and the load controller design was finalised. Additionally HEL used the time to source a new design of ground mounting system for the solar panels – certified to withstand winds of 225 km/h without the requirement for poured concrete.
Spring of 2021 will see plans roll out for pilot installations within the Hoy community through the summer / autumn of 2021. A roll-out of general installations across 100+ homes is planned thereafter, bringing long-term savings and efficiency savings over many years for our remote rural Scottish community.